Patty Talahongva is Hopi  from the Walpi Village located on  First Mesa in the town of Polacca, Arizona, and was born in Denver, Colorado. She has worked for decades in television news, radio news and print,  where she started at the age of 16. She covered many national stories throughout her career, including the Rodney King riots in Los Angeles in 1992, the opening of the Smithsonian’s National Museum of the American Indian in 2004 at the National Mall in Washington D.C.,  and Arizona’s Yarnell Fire that took the lives of 19 Hot Shot firefighters. She was also a former president of the Native American Journalist Association and  a current board member of the Center for Native American youth. In 2019, she joined Indian Country Today as the executive producer of the television news program. 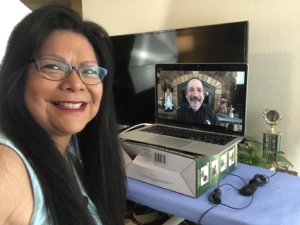 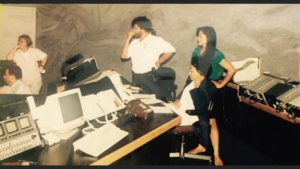 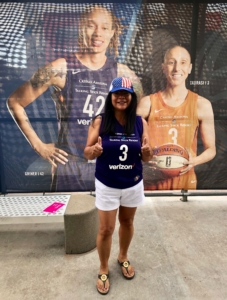 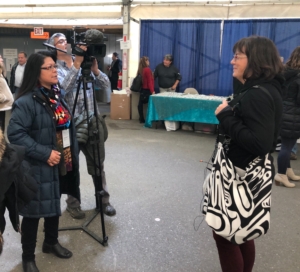 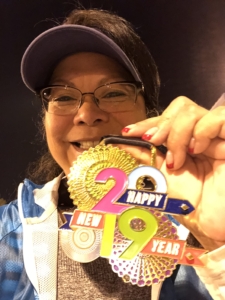 Q1: Tell us a little about what you do at Indian Country Today and how you joined the team?

I heard that they were moving to the Cronkite School in Phoenix and that they were going to be hiring. I thought: Good grief, that’s in my backyard. I talked with Mark [Trahant] and he said they wanted to go into broadcasting and start a newscast. So that’s right up my alley. I was very excited and what was very appealing to me is the focus of our stories. I applied for the job and got hired as the executive producer.

The idea was we were going to start a weekly newscast, a half-hour newscast. So one newscast a week, that was our goal. Then the pandemic hit. We did the reporters roundtable where we talked with Jourdan [Bennett-Begaye] and talked with another reporter to see how their Indian communities were doing and what they were reporting on. We started with that and it was well received. We thought, this is really good; we’re giving information out. So we did another one and that one was also well received. Then Mark came to me and he said something along the lines:  I’ve got an idea and you might not like it.  I said, what is that? He said, how about we start a newscast? I said, yes, let’s do it. Because there was so much news we needed to get out about the pandemic, just basic overall CDC guidelines, and then bringing on Native American experts to talk directly to the people to say what we are doing.

The idea was that we start a Monday through Friday, weekday newscast, half an hour and we would put this on our platform. That’s how we started on April 6.  We started in a very humble way; we had one guest and we did our best. I’m so incredibly proud of this team that came together. Vincent [Shillings] is just amazing. He said, I know how to do this; we can do this on Zoom. Jourdan [Bennett-Begaye] said I can do this COVID update. Everything just happened so fast because I anchored the reporters roundtable. So I’m acting as producer and anchor for the newscast.

Q2: What motivates you to cover Indigenous issues and communities?

They’re not covered anywhere else. I’ve been in those meetings with the heads of networks: ABC, CBS, CNN, NBC. I’ve sat in those meetings with those executives and talked about the importance of diversity. They all agreed yes, yes, yes,  we need to be diverse, yes we need to hire. They still don’t hire Native Americans. I have heard that for 20+ years. I don’t believe them anymore. They don’t want to diversify because they have had ample time to diversify. I’ve sat with local ownerships for local news and the same thing. It’s ridiculous why we don’t have more Native Americans on the air.

Q3: What is the most exciting thing about Indian Country Today’s newscast and its future?

To do a weekday newscast, I guarantee  you, no other station in the country is producing the content that we’re producing with as few as people we’re producing it with. This week we moved into the Phoenix Indian School Visitor Center. We incorporated another guest segment, we incorporated a five-minute news blog … as if we didn’t have enough on our plate. We decided to offer a five-minute news blog to all the tribal radio stations, free of charge. We  take that audio and produce it for radio stations and they hear it all across the country. We started off with this plan to post our newscast on our platform, and I want to say within a couple of weeks FNX called and said we want your newscast and we’re going to air it in primetime. We were just surprised and happy and said sure, because today they reach more than 75 million households across the country. So we’re seen in Seattle, Chicago, in New York and all sorts of other places. And then when we did that, because they’re on PBS, we had to start getting our newscasts closed-captioned. Then later, Arizona PBS said wow, we can’t believe you guys are creating a newscast in the middle of this pandemic and we love it and we want to air it.  So the next thing you know [starting May 11], we’re on Arizona PBS as well. We went, within a matter of a month, from being a weekday newscast posted on our platform to being broadcast in major cities all across the U.S. We’re on television in major markets. We’re going full blast.

Learn about our newscast sponsorship/underwriting opportunities.

Q4: Describe what it means for you to supervise a newscast, which includes Native team members, that is dedicated to Indigenous issues?

It’s wonderful because we don’t have to explain federal Indian law, we all get it, we all understand that, we lived it. We don’t have to explain why a story about a sacred site is sacred. That’s the really nice luxury because I never had that for any other newsroom I’ve ever been a part of. Every other newsroom I had to do basic Indian 101 training; and that’s not bad, but it’s sad that journalists don’t know about Indian Country. But it’s not their fault because our histories are not taught in public schools. And when you go to college you still really have to search for these classes to learn about federal Indian law, to learn more about Native American history, the struggles that we’ve  had. Again, [it’s] bringing that different perspective to the news today. I spend many years in mainstream news and every time I had to explain the situation, the perspective. Even explaining the federal relationship between tribes and the federal government and why they don’t answer to the state. Quite often people would come to me and say, hey I don’t understand this. I would help explain the situation and remind people it’s important to have a Native angle in the story, for whatever reasons were for that particular story.  It’s important to have a diverse newsroom.

The jokes. I love our whimsy channel on Slack because that brings out everybody’s sense of humor. If anything sets Native Americans apart from other people of color, it’s our sense of humor. We just have a great reaction to things. I love just  joking around and seeing what people are putting in there and laughing about whatever it is. It’s a lot of fun. I say this to  Carina [Dominguez], Vince, Jourdan, “we’re having fun; this has got to be the best and most fun journalism job ever.” Even though things get stressful and crazy, it’s still fun because we’re serving our people and we have the skills to be able to do that.  I think that’s really cool. We’re a highly skilled newsroom and working together. We are covering Indian Country and we do that because we care about our people.