Jourdan Bennett-Begaye is from New Mexico and a Diné citizen of the Navajo Nation. She identifies as The Towering House Clan, The Coyote Pass Clan of Jemez, The Mexican Clan, and The Hopi with Red Running Into the Water Clan. She received her master’s degree in magazine, newspaper and online journalism as a Newhouse Minorities fellow  from the S.I. Newhouse School of Public Communications at Syracuse University in New York. After graduate school, she taught high school journalism, video production and theatre in New Mexico. She has written for numerous publications including Native Peoples Magazine and NPR’s NextGen Radio Project. She also co-founded the Survival of the First Voices, an art and media organization for Native youth. 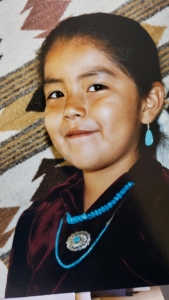 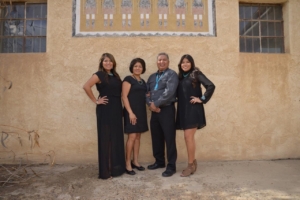 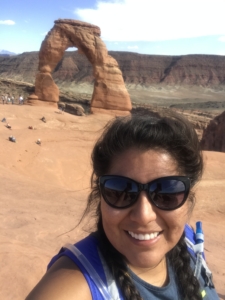 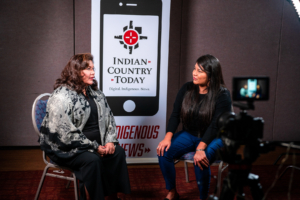 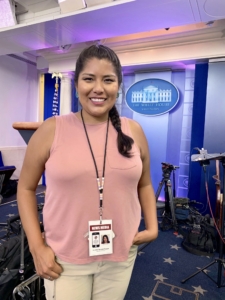 Q1: Tell us a little about what you do at Indian Country Today and how you joined.

I first saw this job when I moved to Seattle, Washington. I was looking for jobs and I was on Twitter. I feel like at that point I applied for a dozen jobs and I was like: I don’t know what else I can do. Then I saw this story, recently published on Indian Country Today, and I thought:  I wonder what they’re doing because I was there when it went dark and people didn’t know what to do with it.

I found they had a job opening for a reporter/producer. I thought, I am the person for this job. I know how to shoot video, edit, retouch your audio, write and take photos. I was promoted in a year to Washington editor and a year later, deputy managing editor. I am contributing and helping to change the narrative by talking to reporters, helping them craft the story they’re trying to tell and giving them guidance.  Also, creating partnerships with other media outlets whether it’s tribal or non-Native.

Q2: What motivates you to cover Indigenous issues and communities?

My family: my mom, my dad, my younger sister, my cheii, my grandma, my nephews, my nieces, my cousins. We’re often overlooked; we’re not even looked at in mainstream media. There’s a huge misconception and misunderstanding about us. I love bringing my experience and the context that I have to the table to do the accurate reporting that’s needed.

Q3: What are you most excited for as Indian Country Today continues to grow and solidify itself?

I’m really excited to show the country, North America, the world, how talented Indigenous people are.  The past several years, I always heard people asking where they can find Native journalists, a Native editor or Native artist. They’re always going to the same people, but there’s so much talent out there and room to grow.

I’m just excited with this growth with Indian Country. I’m excited to show we can shine brighter than we are right now. And that we can bring our communities with us, too.

Q4: Can you explain what it is like to be an Indigenous reporter who is developing the data for coronavirus cases in Indian Country?

I started in March out of curiosity because the team was sharing cases [of COVID-19]. And I thought it would be really cool to see what this looks like. We started a spreadsheet and in the first week, I started collecting data. I shared it with Mark [Trahant] and he said we should make this public.

The database is collecting the number of positive cases and deaths in Indian Country announced by the tribe or their tribal health clinics. We don’t use state data, CDC data, and IHS data; they have their own way to collect the data, but we are really trying to respect tribal sovereignty. Recently, we partnered with Johns Hopkins University, the [Bloomberg] School for Public Health and the Center for American Indian Health, to make the data more comprehensive. We also got help from the University of Oklahoma, Gaylord College of Journalism and Mass Communications.

The reason why we started it was because I was curious and I saw a deeper need for it. At that time in March there was no daily update of Indian Country cases. We started seeing on social media, Native people really wanted to see the bigger picture of Indian Country and how the pandemic was affecting communities. The picture allows the federal government to see what is contributing to the spread of the virus, what infrastructures are needed and policy changes are needed to support Native communities so they can thrive and overcome this pandemic too.

Collecting the data for me as a Diné woman, an indigenous reporter, is really meaningful and rewarding. It’s just very tiring, I won’t lie. It’s a slower process.

Q5: Lastly, what’s your favorite thing about being part of the team at Indian Country Today?

I like how I can say “yadilah” or #ydl and everyone knows what I’m talking about. They know my grief during that time or my frustration in a silly way. I would not have gotten that from a non-Native newsroom; people would wonder what’s going on.

“Yadilah” or the slang term for it, what millennials say, is ydl or #ydl. It  just means good grief, or, oh my gosh. It just has so much meaning into one word. It’s a Navajo word.

“Your donation this weekend will be doubled. Can you help us meet our...
Scroll to top